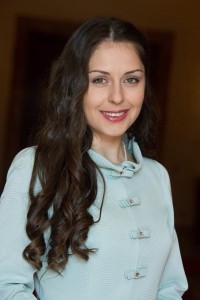 We are very pleased to announce that Miss Elia Zaharia – fiancé of Prince Leka of Albania – has joined Action’s Board of Trustees as an Honorary Member.

Elia Zaharia is the daughter of George Zaharia and Yllka Muji. Yllka Muji is the famous Albanian actress who was given the title of “Maestro of Arts” in recognition of her career in the National theatre. Elia is an actress who lived in Paris for 8 years and graduated from the University St. Danis. She was an actress of the Theatre of Paris in several plays. Besides her passion for theatre, Elia is also a singer and philanthropist and will soon be crowned as Princess of Albania.

Elia Zaharia is the President of the charity foundation “Queen Geraldine Foundation” which provides humanitarian support to families in poverty, orphans and children of all social strata of the population in need.

“It is an honor to accept your sincere invitation to join your esteemed board and serve as an honorary member in supporting your mission to improve the health of mothers and save children throughout our beloved Kosovo” – states the official confirmation received from the Albanian Royal office.

Action for Mothers and Children is honored to have Elia Zaharia join our Board of Trustees.