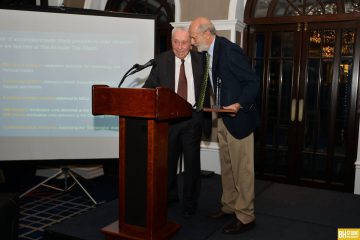 Action for Mothers and Children presents the first ever ‘Lifetime Contribution Awards’ to James C. Strickler, MD, and George A. Little, MD, FAAP, at a special ceremony held at the Yale Club of New York City.

Awards were presented by AMC Honorary Trustee, Richard Lukaj, founder and Managing Partner of The Bank Street Group LLC. Lukaj commended Strickler’s work in the Republic of Kosovo as well as his dedication in helping co-found Action for Mothers and Children.

Strickler, former Dean of Dartmouth Medical School, established the International Rescue Committee’s first health unit to provide medical care to refugees and conflict-affected peoples, which now serves Africa, Asia, and Europe. Later in his career, Strickler initiated the Dartmouth-Kosovo Project, which has aided thousands of refugees after the Balkan war.

Upon receiving his award, Strickler commended the work and contribution of Little in the Republic of Kosovo and to AMC in the past years.

Little is an emeritus professor of pediatrics and emeritus professor of obstetrics and gynecology at the Geisel School of Medicine at Dartmouth, and the Children’s Hospital at Dartmouth-Hitchcock (CHaD). He is a neonatology pioneer, becoming New Hampshire’s first neonatologist and setting up the first neonatal intensive care unit in northern New England. Today, Little is crucial in developing the first Neonatal Referral System in the Republic of Kosovo.

The Lifetime Contribution Award (LCA) recognizes individuals who have made outstanding contributions to ‘Action for Mothers and Children’ through the dedication of their professional life to the development of AMC. The prize recognizes outstanding individuals who have played a major role in the introduction, growth and development of revolutionary programs with the organization at a national and international level.