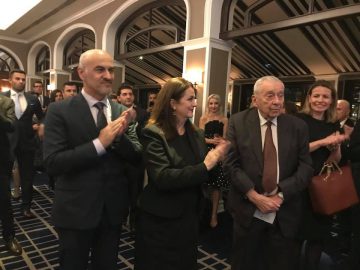 The Foundation Action for Mothers and Children (AMC) from Prishtina, Kosovo, held its second charity evening in United States at Yale Club in New York City on 8th of November 2016.

Many supporters of AMC work gathered to make this evening a success. With over 70 guests from business, culture, politics and arts, the highlight of the evening were the speeche given by the Virginia Apgar Award Winner, George A. Little, and other influential people such as the businessman’s Richard Lukaj, Bekim Ahmetaj and Valon Xharra.

The Speakers emphasized the importance of building a relationship between the philanthropic community of Kosovo and that of the United States, as well as the encouragement of raising funds that will help reduce the mortality of mothers and children in Kosovo.

During the evening many people gave their contribution and donated funds to the two-hour cocktail. Part of the event was also a quiet auction, which included a dress from Besë Rugova, a bag from Agnesa Vuthaj, jewelry from Sara Shala, granite plates made by Dhe by Granita, jewelry from Anita Berisha, a photo session from Fadil Berisha, 4-day stay at Valon Xharra’s villa in California, eyebrows service by Sabrie Celaj, and a Queen Teuta suit from Afërdita Delaj.

The success of this evening would not be possible without the support of the Kosovo Consulate in New York and Ambassador Sahatqija, as well as the donors like Dr. Agron Abrashi, Lukaj Foundation, Dorjan and Mira Puka, Dr. James C. Strickler, Shpresë dhe Rexhe Xhakli, Bekim Ahmetaj, Valon Xharra, Fadil Berisha, and many other names that made this evening happen.

The evening ended successfully, promising AMC’s new friends that the funds raised will make a significant difference in the lives of mothers and children in the Republic of Kosovo.