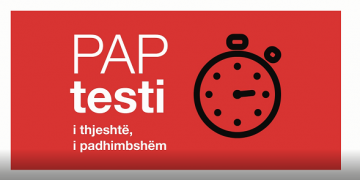 The free Pap tests continued successfully in 2017 in the Municipality of Prishtina. The cervical cancer screening program, through Pap tests, was initially launched in 2016 and so far women from different age have done the Pap Test at the three Family Medicine Centers in Prishtina. The purpose of screening for cervical cancer is the early detection of abnormal cervical cells in the early stages when they can easily be removed before the cancer develops.

This program, which at the same time is one of the priorities of the strategy of health sector in Kosovo, was launched thanks to the dedication and inter-institutional cooperation between the Municipal Directorate for Health and Social Welfare in Prishtina, Ministry of Health, Institute of Pathological Anatomy at UCCK, Women’s Wellbeing Center in the Main Family Medicine Center in Prishtina, Family Medicine Center Nr. 5 and Family Medicine Center No.6 in Pristina, National Institute of Public Health. The program was initially and consistently supported by the United Nations Population Fund (UNFPA), the Kosovo Office, the World Health Organization, and technical coordination were done by the foundation Action for Mothers and Children

continued to increase in the specific field of cervical screening.

Thanks to the support provided by the Municipal Directorate for Health and Social Welfare in Prishtina and the Ministry of Health, the provision of Pap tests will continue as a regular service in three Family Medicine Centers in Prishtina, including the Women’s Wellbeing Center at the Main Medical Center Family, FMC 5 and FMC 6.

To learn more about the Pap-Test click on the following video https://www.youtube.com/watch?v=k0azXlBHmFY

The screening program is also supported by the Ministry of Health, the National Board for Cancer Control, the Institute of Pathology within the University Clinical Center of Kosovo, National Institute for Public Health in Kosovo, United Nations Population Fund – UNFPA (Kosovo Office), World Health Organization – WHO (Kosovo Office), and the non-governmental organization Action for Mothers and Children.