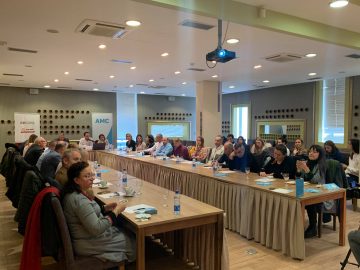 Today, a discussion was held on the topic “The increased number of cesarean births in Kosovo”, organized by Action for Mothers and Children (AMC) with the support of the Solidar Suisse office in Kosovo. The purpose of the round table was to discuss among the stakeholders, the causes of the increase, the consequences and to identify concrete recommendations for preventing and reducing the increase in the number of cesarean births. The findings of the round table will be included in the policy summary to be published by AMC, which will provide a general overview and recommendations for any health institution management, gynecological obstetricians and other stakeholders.

Vlorian Molliqaj, Executive Director of AMC, presented a summary of policies on “Cesarean delivery in Kosovo”, which emphasized that the rate of cesarean births in Kosovo has multiplied by 7.5% since 2000, to 27.3% in 2015. %. Mr. Molliqaj presented some of the possible causes of this increase, as well as some concrete recommendations that could be taken to prevent an increase in the number of PC births in cases where there are no complications.

Magbule Elezi, from the Kosovo Midwifery Association, emphasized the role of midwives in preparing and advising mothers on the decision to give birth naturally or via CB.

Dr. Albert Lila, from the Association of Gynecologists of Kosovo, presented the trend of increasing the number of cesarean section births over the years and compared the birth rate of public hospitals to private hospitals.

The round-table was concluded with a dynamic discussion by participants highlighting the need for creating guides for natural and caesarean section births, the importance of educational sessions for women and their partners, and the importance of including midwives in the pregnancy and birth process.