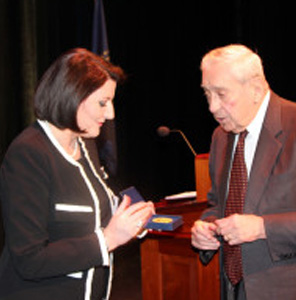 Dr.Strickler has an amazing life experience and achievements under his belt. He served during the Korean War in Japan, Okinawa, Taiwan, Hong Kong, and the Philippines, visiting local clinics and hospitals.

He enjoys being a doctor, teaching and has a particular interest in international health, having volunteering with the International Rescue Committee (IRC), an organization which assists refugees and victims of war around the globe.

In the 1999 at the end of the war in the Balkans, as one of his overseas trip for the IRC, Dr. Strickler visited Kosovar refugees in Albania and Macedonia. Upon his return home, he and his DMS colleagues formed the Dartmouth-Kosova Project. This collaboration has helped us, the Kosovars, rebuild the medical school and hospital, which had been destroyed by the war.

Dr. Strickler always claimed that sustainability is crucial in international aid programs, hence the idea of creating a Foundation in Kosova, whose primary mission would be saving the lives of young mothers and babies, by aiding and helping the public health sector in providing a good medical care to mothers and infants.