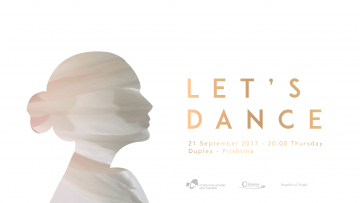 It is time to Dance Again

Transformed into a traditional annual event on the philanthropic scene in Kosovo, the event “Let’s dance for mothers and children ” returns on September 21, 2017, at Duplex Premium in Prishtina, starting at 20:00. The event is organized by the Foundation Action  for Mothers and Child and Crimson Capital thanks to the support of sponsors and the public who believes in the mission of this charity event.

Some of the activities that happened with the funds collected by Let’s Dance in September last year are: the neonatology clinic at UCCK has been supplied with 200 bottles of Surfactant medication, 5 cardiopulmonary monitors for children and an information center for women’s health and mothers’ classes in Kaçanik and Prizren have been opened.

Also, thanks to these funds, the Foundation has managed to advocate for health institutions to develop a national roadmap for standard infant transport from regional hospitals to Pristina. Another achievement is the expansion of the social enterprise Teshavesha.

“It’s exciting when we see that now, Let’s Dance has reached the public’s awareness as one of the most important charity events in the country. When we started preparing for this initiative three years ago, the organizational team did not think that this event would turn into an important tradition that affects the lives of hundreds of mothers and children, “says Mrika Aliu, Executive Director of the Foundation.

Ms. Aliu thanks all the supporters of the Let’s Dance event, both sponsors and participants and volunteers. “For two years we have gained € 56,065.  “The Let’s Dance event is not just a event to raise funds, but has turned into a movement of solidarity, generosity and charity for children and mothers in need. This event gives hope and promotes life. “

The Let’s Dance Evening this year will be held on September 21, at Duplex Premium, starting at 20:00. The entrance price is € 30 per person and includes drinks, food and music. The money collected from the tickets goes all to funding the programs. Tickets can be purchased at Crimson Capital, Teshavesha, Bon Vivant, Matisse, Green & Protein, Soma Book Station, Creme de la Creme, Hallakate, Bonzai and Babel.

The organization has been supported by many sponsors. Golden Sponsor is BpB, silver sponsors are Economic Bank, TEB and Solidar Suisse. Bronze sponsors are Finca Kosova, KEP and Universum.