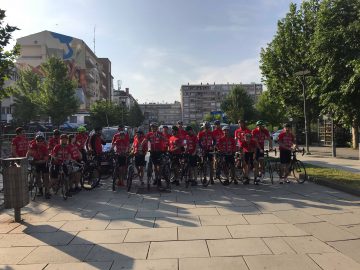 The annual event “Cycle Kosovo for Children” raised around 7000 Euros

The annual event “Cycling Kosovo for Children” organized for the fifth year in a row was attended by around 30 cyclists on the 4-day trip around Kosovo in support of the foundation “Action for Mothers and Children” was completed successfully. The ride took place around Kosovo, with a short deviation to Albania, passing through some of the largest cities for 4 days. The total distance was over 500 km with over 7,000 meters of climbing with the starting and finishing point in Prishtina.

This year’s event was able to raise around 7,000 Euros through the contributions of companies and individuals who supported cyclists’ challenge, the online campaign at KosovaIdeas, as well as the end-of-tour fundraiser held at Miqt Pub upon cyclists’ return. The funds raised will be used to purchase a gas analyzer machine – GEM 3000 for the maternity unit of Gjakova. This analyzer is essential in measuring the level of O2 and CO2 in babies when they have difficulties with breathing and is essential in diagnosing earlier if the baby needs to be referred for specialized treatment in tertiary care.

Albion Hadri and Agim Bilalli, organizers and cyclists, expressed their satisfaction and excitement for the number of participants in this cycling tour. “We are grateful for all the donations received this year and hope that this charity event will grow in the years to come,” said Hadri.

“Cycle Kosovo for Children” is an annual cycling event around Kosovo to raise funds for Action for Mothers and Children. This event was successfully organized in 2014, 2015 and 2016 and is growing every year. This event wouldn’t able to be successful without the support of Eulex, Kosovo Police, Devolli Corporation, Astes , BpB, Shtepiaku, EcoClean,  On Line Studio European Autocare, Miqt Pub and Lulu’s Coffee and Wine. Our in-kind supporters were Cineplexx, Oliver Weber, Monroe Bar, Rudi’s Cake Factory, Ponte Vecchio, Siam Massage, Auto Service Zhushi, Shtëpiaku.

The online crowdfunding campaign is still active through KosovaIdeas platform able to receive any amount to further support the goal of cyclists, accessible via: https://kosovaideas.com/campaign/detail/426