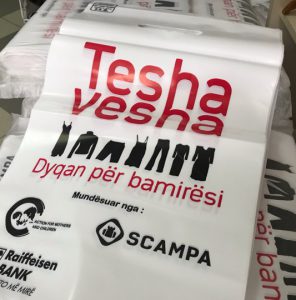 Scampa donates 12,000 units of plastic bags for the Teshavesha stores

The second-hand charity shop ‘Teshavesha’ is now operating in two places in the city of Prishtina and in one in Ferizaj thanks to the continued support of donors and citizens. For over three years now, Scampa has been Teshavesha’s faithful partner and donor, for the third time this year donating an amount of 12,000 units of plastic bags to support the operations and activities of the three stores.

Scampa is an industrial producer of plastic bags which operates since the year 2007. After several years of operation and major investments in equipment and staff, the factory has increased capacity to supply Kosovo market, as such to become known for its products of biodegradable plastic bags. Scampa’s significant contribution helps support the healthcare programs of the Foundation.

Teshavesha charity shops accept and sell second-hand clothes from citizens, while the revenue funds projects for mothers and children’s health, such as: purchase of medications and medical equipment, development of the neonatal referral system,and expanding the services of women’s health resource centers “Mother’s Classes”.