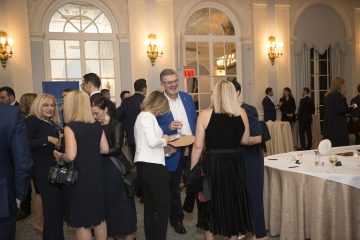 Over $ 70,000 were raised at the annual event of ‘Action for Mothers and Children ‘ at Yale Club in New York

The Foundation Action for Mothers and Children (AMC) from Prishtina, held its fifth charity evening in United States at Yale Club of New York City on  the 10th of October 2019/

Many supporters and lovers of AMC’s work came together to make this evening a success. The key note speaker of the event was the world-famous Opera Soprano Inva Mula, who supported the good work of AMC and called to support this humanitarian mission. The guest of honor was Ambassador Vlora Citaku, who started this tradition five years ago where she gathered philanthropists from the United States of America to donate for mothers and children in Kosovo. Other prominent personalities of the evening were Miss Universe Catriona Gray and Miss Albania Cindy Marina.

During this evening, AMC also gave the award ‘Ambassador for Maternal and Child Health’  to the famous photographer Fadil Berisha for his outstanding contribution and tireless work for mothers and children in Kosovo.

During the evening many people made their contribution and donated to the two-hour reception. Part of the event was a quiet auction, which included creations by Besa Rugova and Drenusha Xharra, jewelry by Sara Shala, granite plates made by Dhe by Granita, a photo session by Fadil Berisha and another by Fioralba Kryemadhi, two dinners at the ‘Cka ka Qëllu’ restaurant, Sanija Eyebrows eyebrow shaping services, and a painting with the portrait of Mother Theresa from Anduena. Also part of the auction were the English company Campbell Marson Eyewear, Dardi’s Art glass sets, Shiseido and Pinch of Colors cosmetics, a makeup session by Vjollca Broja, jewelry from Vajzë and a costume from Maksmeanwear. The evening was also accompanied by the beautiful sounds of Merita Halili and Raif Hyseni, Dj Fati and Joanna Kaimi.