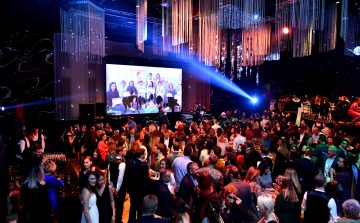 On the fifth anniversary of the charity event Let’s Dance, about 400 people came together for a good cause, where for the fifth time it has been proven that the charity movement that started in 2015 has already become one of the most beautiful traditions in the capital. The event was held on October 24, 2019 at Sheshi 21 in Prishtina.

“It is a great feeling to see that a big number of the community came together tonight to support AMC’s mission. We are grateful to all the donors and continued supporters of the foundation that made Let’s Dance an unforgettable night,” says Vlorian Molliqaj, Executive Director of the Foundation.

As every year, the purpose of this event is to raise funds which are then used by the Foundation Action for Mothers and Children  to support various health programs, provide medicaments and medical equipment, and provide special treatment to infants. This year, approximately € 15,000 was raised through sponsorships and ticket sales to be used to fund AMC’s health programs. The event was also supported by our friends, who provided food, drinks, music, decoration and promotional materials as an inkind sponsor of services and products in excess of € 13,000.