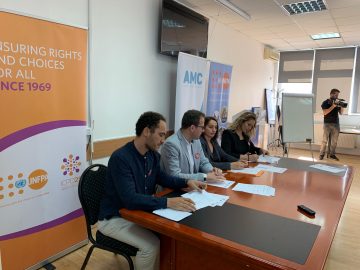 During 2019 -the first phase of implementation, about 250 women from Mitrovica Municipality will be screened. Also, screening capacities will be built within the Primary Health Care (PHC) in Mitrovica as a procedural algorithm that regulates a better co-operation system between PHC and Secondary Health Care – Pathology Laboratory.

Apart from this new primary care service, the parties also intend to initiate discussions between institutions and stakeholders in order to draft and implement health policies that build a qualitative screening system for cervical cancer as a health right foreseen by the Law on Reproductive Health and planned in the National Program for Cancer Control.

This program, through Pap tests for women and girls from the Municipality of Mitrovica will help the early detection of abnormal cervical cells and their treatment to prevent cervical cancer.

This pilot project is a result of the cooperation between the Department for Health and Social Welfare in Municipality of Mitrovica, National Board for Cancer Control, Ministry of Health, Main Family Medicine Center in Mitrovica, Institute of Pathology at the University Clinical Center of Kosovo, and is supported by the United Nations Population Fund-UNFPA Action for Mothers and Children.