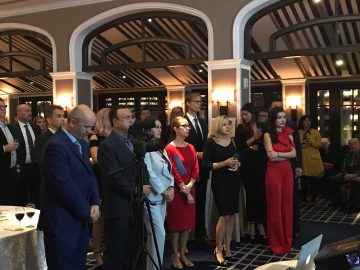 The Foundation Action for Mothers and Children (AMC), held its third fundraising event in the United States at the Yale Club of New York City on October 16, 2018.

Many supporters of AMC gathered to make this evening a success. The Keynote of the evening, H.E. Ambassador Besiana Kadare, Permanent Representative of Albania to the United Nations in New York, supported and endorsed the work of Action where she also called for continued support from the guests towards this humane mission. The evening’s special guest, Ambassador Teuta Sahatqija, joined as well in continuation of her support for many years now.

During the evening, Action for Mothers and Children gave the ‘Lifetime Contribution Award’ to the businessman and philanthropist Richard Lukaj in recognition of the extraordinary contribution and inspiring work for mothers and children in the Republic of Kosovo.

During this evening many people gave their contribution and donated funds at the two-hour cocktail. Part of the event was also a silent auction, which included a designer top by Bese Rugova, jewelry from Sara Shala, handmade granite plates from Dhe by Granita, a photoshoot from Fadil Berisha, engineered wooden eyewear from Campbell Marson, two dinner certificates from ‘Cka ka qëllu’, a dinner from Angeletto Resaturant, a brunch at Vero Restaurant, 4 day stay at Valon Xharra’s estate at San Miguel, California, an Eddy Bogaert painting, Sabrie’s eyebrow services, and a $1,000 gift certificate towards a plastic surgery procedure with a board certified plastic surgeon in NY – Body Cosmetica.

The success of this evening would not be possible without the support of the Kosovo Consulate in New York and Ambassador Sahatqija and our friends Fadil Berisha, Bledar Asllani, Drin Kukaj, Mark Kosmo, Sara Shala and Valon Xharra.

The funds raised will benefit Action for Mothers and Children in support of its health programs in Kosovo, specifically in: medical supplies, supporting the arrival of Survanta medication, scaling the neo-natal transportation system, expanding the services of Women’s Health Resource Centers, and Cervical Cancer Screening.