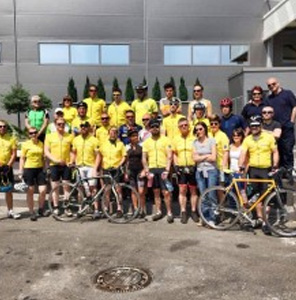 “Cycle Kosovo for Children” raised around Eur 15,000 for mothers and children

The charity event “Cycle Kosovo for Children” raised around Eur 15,000 for mothers and children

After 3 days of cycling around Kosovo, the cyclists returned back in Prishtina last night at around 1900hrs. In the morning of June 5th, a group of around 20 cyclists started their cycling tour around Kosovo for a total distance of 500km. The cyclists, wearing yellow T-shirts, set off from Prishtina to Mitrovica, Peja, Gjakova, Prizren, Ferizaj, Gjilan, Kamenica and back in Prishtina last night at Sabaja Bar – where the heroes were welcome. Throughout the tour a number of citizens and cyclists joind the team.

Mark Dixon, cyclist and one of the organizers says that “We close the Cycle Kosovo for Children as a very successful event this year too. Although we were tired to cycle this whole distance, the cause for which we were cycling was stronger. We cycled 500km of distance with 8000m of climbing in warm temperatures and nights with thunderstorms, but we did it successfully.”

This cycling event is a charity event to raise funds for “Action for Mothers and Children.” “This is a huge success to raise all this money that support supply programs of Action for Mothers and Children, so we are very grateful to the organizers, cyclists and all those who contributed,” – says Arta Hasanaj, the representative at Action for Mothers and Children and continues: “This event will be held the following years as well, building on an annual cycling event, and all the money raised will be used to help improve maternal and child health in Kosovo. The money raised this year will be used to support supply programs designated for the Neonatology Intensive Care Unit in Prishtina, which offers care for premature babies.”